Glysofor F is a registered, physiologically harmless heat transfer and cooling medium based on propylene glycol. All of the substances contained in Glysofor F are approved as food additives (EU/USA), and have very low levels of oral toxicity.

Glysofor F is used particularly in the food and beverage industry. With regard to the requirements of the food industry, Glysofor F offers a series of advantages. This product is largely flavourless, colourless, and odourless. All of the substances it contains are Generally Recognized As Safe (GRAS) by US supervisory body the FDA (Food and Drug Administration).

Glysofor F complies with the FCC (Food Chemical Codex), and can therefore be used for applications where there is direct or indirect contact with foodstuffs (specific concentration limits).

The NSF has registered the concentrate and ready mixes of Glysofor F.
Each individual concentration has a separate registration number, which can also be found in the NSF certicate and on the NSF website at www.nsfwhitebook.org, indicating the company name: Wittig Umweltchemie GmbH or the product name: Glysofor F. 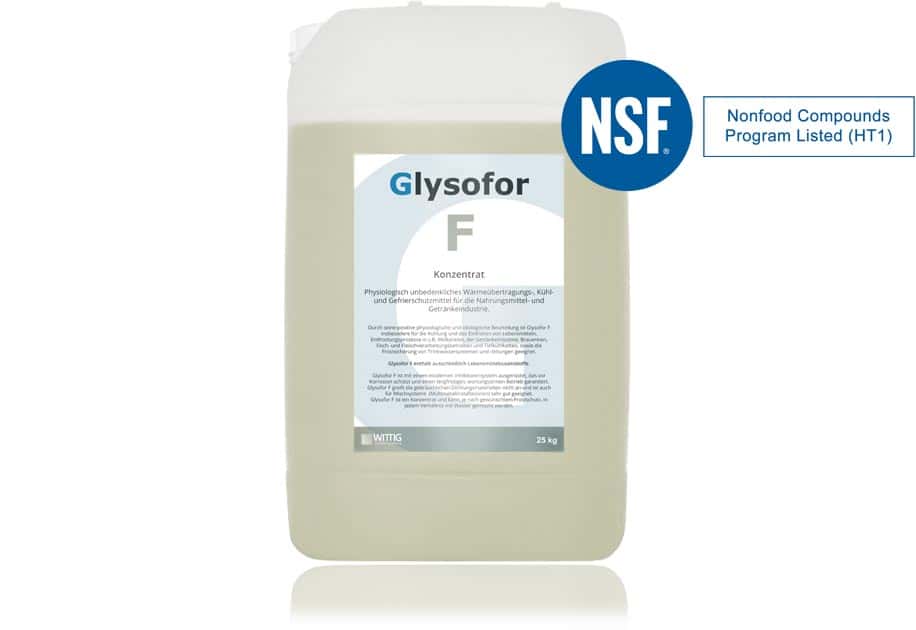 depending on the concentration

Glysofor F offers optimal corrosion protection for metals such as copper, brass, solder, grey cast iron, steel, and aluminium. The corrosion inhibition and the concentration of Glysofor F can be checked by simple methods, and if necessary adjusted. Typical application areas for Glysofor F are the refrigeration and freezing of foodstuffs as well as defrosting processes, for instance in dairies, the beverage industry, breweries, fish and meat processing businesses, and frozen food chains. Due to its harmless nature, Glysofor F can be used to provide frost protection for drinking water systems and lines. Glysofor F serves as an antifreeze, corrosion protection agent, and heat transfer medium or cooling medium (cooling brine) in heating and cooling systems. Glysofor Solar F optimally prevents frost damage, corrosion, deposits, and sludge accumulation. It exhibits longterm resistance to the formation of biofilms, rot, and microbiological decomposition. Homogeneous Glysofor F/water mixtures do not separate, which ensures continuous frost resistance. This guarantees low-maintenance operation of systems operated with Glysofor F.

Glysofor F is a favoured heat transfer medium used in the food industry. In food production, due to a specific manufacturing process, use of a physiologically harmless product may be indicated. In this case, Glysofor F frequently meets the sensitive requirements, as it consists exclusively of food additives, and is practically colourless, odourless, and flavourless.

Glysofor F is used in the food industry as a cooling brine. Typical applications are for refrigeration processes in the beverage industry or in the processing of milk, meat, or fish products. Glysofor F is supplied as a concentrate and, depending on the frost resistance required, can be mixed with water. Thanks to the excellent ability of Glysofor F to lower the freezing point, refrigeration and deep freeze systems can be safely operated at sub-zero temperatures at low as -45°C. This optimises the refrigeration and freezing processes and thereby contributes to making cost savings and increasing productivity. Glysofor F can be used in a broad range of temperatures from -45°C to 120°C, which gives it a high level of flexibility and extremely variable control of the temperature. Glysofor F is normally used in 30 to 50% concentration. The aqueous solution is used in cooling systems with central cooling units which cool the fluid down to the desired target temperature. Then the cooled Glysofor F solution is conducted, for example, through a system of cooling coils, though which the cold is transferred into the foodstuffs being cooled.

For fermentation processes, Glysofor F offers excellent cooling performance and temperature control. Glysofor F is used particularly in the production of beer and wine to cool fermentation and mash tanks as well as to cool wine and brewer’s yeast.

Typical cooling processes can be found in wine and beer production, juice production, and the dairy, meat, and fish industry. Glysofor F is also used in dispensing systems to adjust beverages to the desired temperature for consumption. When dispensing carbonated beverages, Glysofor F is used to set the optimal dispensing temperature, in order to keep the carbon dioxide content constant during the dispensing process. During traditional champagne production, the bottle necks are immersed in deep-frozen Glysofor F solution, in order to induce rapid freezing of the bottle neck, and remove undesirable substances from the bottle by the champagne method.

Glysofor F is used to freeze packaged foodstuffs such as meat, fish, vegetables, etc., by immersing the packaging in a Glysofor F solution deep frozen to -45°C (standard temperature -10 to -15°C ). Due to its efficiency, this process has clear advantages over cooling in blast freezers or plate freezers.

Based on propylene glycol, Glysofor F significantly lowers the freezing point of water and prevents heating systems or cooling systems, for example, from freezing. Glysofor F ensures that the aqueous solutions remain in workable liquid form, even in sub-zero temperatures. With Glysofor F, heating systems can be temporarily switched off, even in frost conditions, while however remaining ready for operation at any time. Glysofor F reliably avoids bursts caused by frost, which also result in damage to the system. Due to its physiologically harmless nature, Glysofor F can be used to provide frost protection for drinking water lines and drinking water systems.

Glysofor F contains special corrosion inhibitors optimised for the food industry, which provide the best possible corrosion protection for metals. This corrosion protection is effective on all important metals that are generally used in heating and refrigeration system construction as well as in industrial plant building. Installations made of copper, brass, solder, grey cast iron, aluminium, steel, and iron are optimally protected from corrosion, even if they are implemented as multi-metal installations.

Corrosion inhibition by Glysofor F can be easily checked and adjusted if necessary.

This data is for information purposes only and does not release from the obligation to carry out a proper material testing upon arrival. The data is based on our current state of knowledge and is not meant to guarantee specific properties. It is meant to describe our products with regard to their composition and shall offer application advice. Possible industrial property rights of third parties and the suitability for a special application purpose are to be observed and verified by the user.

We advise you free of charge and without obligation, so that you receive
the best product for your application.