Glysofor Solar HT is an environmentally friendly solar fluid for systems which could be subjected to high thermal loads.

In special longterm/high-temperature tests, Glysofor Solar HT has shown itself to have comparable resistance to the consequences of overheating (up to 230°C for short periods).

Despite the glycol that it contains being susceptible to decomposition by heating (which cannot generally be prevented), the corrosion inhibitors have demonstrated very good performance. This considerably reduces the risk of the system being damaged by corrosion caused by overheating. 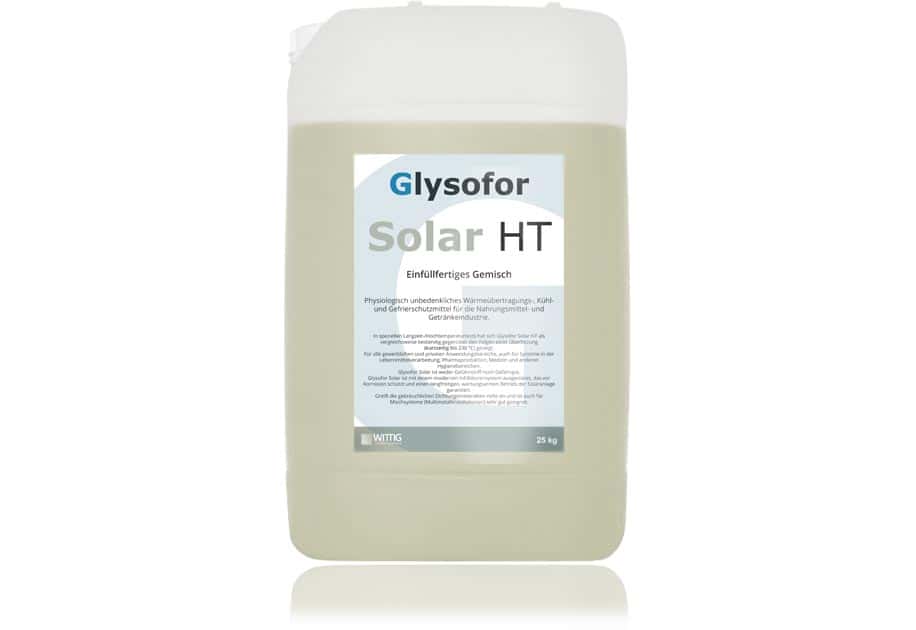 The thermodynamic properties and other specific product features available to download in PDF format.

Glysofor Solar HT is delivered ready for use and offers a reliable antifreeze protection up to:

Glysofor Solar HT is completely free of nitrite, amine, phosphate, silicate, and borate. It is biodegradable and environmentally friendly. Glysofor Solar HT exhibits longterm resistance to the formation of biofilms, rot, and microbiological decomposition, which avoids deposition and sludge accumulation. Glysofor Solar HT does not separate during extended system downtimes. This guarantees year-round, longterm, and low-maintenance operation of the system. In its delivered state, Glysofor Solar HT is frost resistant to -28°C.

In order for the corrosion inhibitors in it to become fully effective, Glysofor Solar HT must be used undiluted.

As an alternative to the ready-to-use product, Glysofor Solar is available as a concentrate. Our products Glysofor N and Glysofor L are available for other application areas.

This data is for information purposes only and does not release from the obligation to carry out a proper material testing upon arrival. The data is based on our current state of knowledge and is not meant to guarantee specific properties. It is meant to describe our products with regard to their composition and shall offer application advice. Possible industrial property rights of third parties and the suitability for a special application purpose are to be observed and verified by the user.

We advise you free of charge and without obligation, so that you receive
the best product for your application.